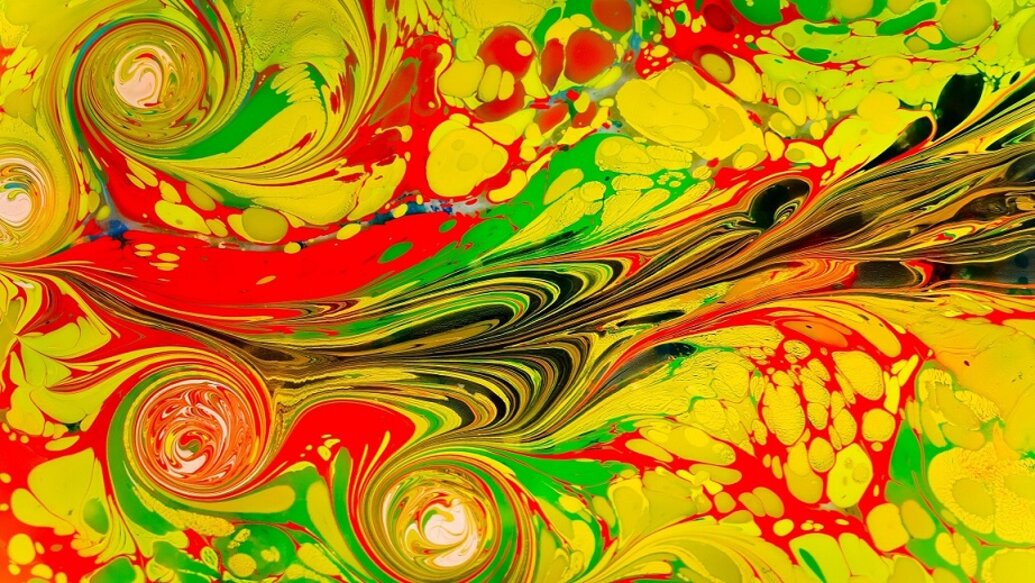 Let's talk about psychedelics of 2C family, 2C-B and 2C-I.

2C (2C-x) is the general name for psychedelics of the phenethylamine family containing methoxy groups at the 2nd and 5th positions of the benzene ring. Most of the currently known 2C compounds were synthesized in the 1970s and 1980s by Dr. Alexander Shulgin, a well-known American biochemist and pharmacologist, author of many psychoactive substances. They are described in his cult book “PiHKAL” (“Phenethylamines I Have Known and Loved”).

Term 2C was suggested by Dr. Shulgin. It’s an acronym for 2 carbon atoms between the benzene ring and the amino group.

2C-substances have both hallucinatory and stimulating effects. By changing the chemical structure in one way or another, you can enhance certain effects. Structurally, 2C is similar to 3,4-methylenedioxy-N-methylamphetamine (MDMA, ecstasy).

The 2C family includes a lot of substances. We will talk about two representatives, 2C-B and 2C-I. 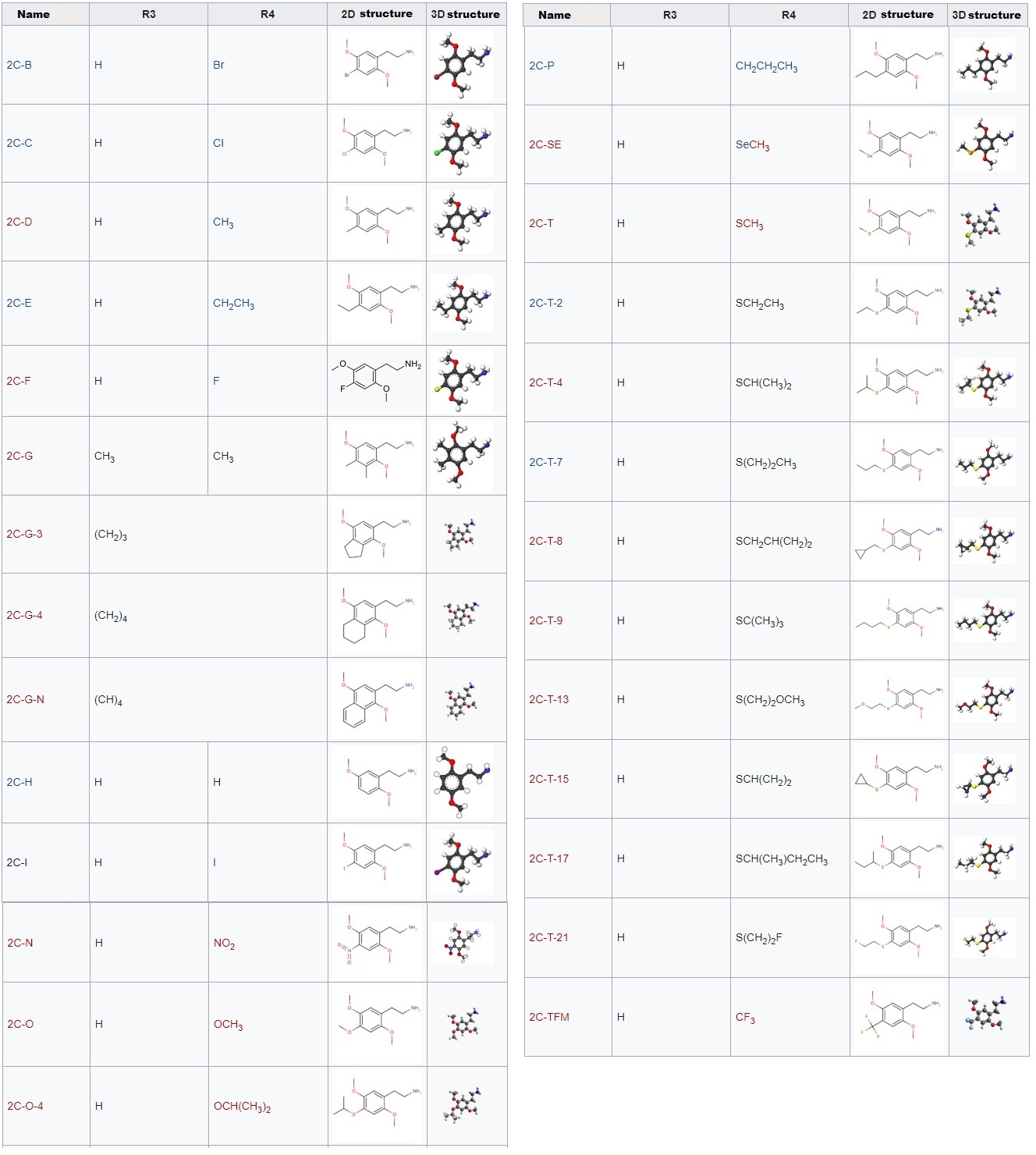 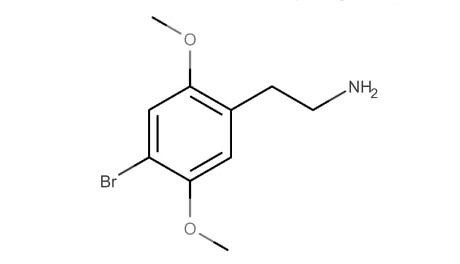 2C-B (4-Bromo-2,5-dimethoxyphenethylamine) is the first synthesized substance among the 2C family. Initially, the new drug was used in psychotherapeutic practice (in psychiatry). Subsequently, 2C-B was sold as an aphrodisiac under the trademark “Erox”.

2C-B quickly gained popularity as a recreational drug. It is distributed in the form of a white crystalline powder that can be compressed into tablets or gelatin capsules. From the mid-1980s, 2C-B began to replace MDMA, as its effects were somewhat similar to those of ecstasy. The drug is characterized by increased empathy sensations at lower doses and pronounced visual effects and psychedelic experiences at higher doses.

The spectrum of activity of 2C-B is very broad. The effects are described mainly as similar to those of LSD and MDMA. At the same time, the trip is different for different people, even if the dose, method of use and environment are the same.

The main effects of 2C-B at common doses are the following:

With use of high doses the following effects are possible:

Even after the main effects have subsided, light side effects may be felt for some time. 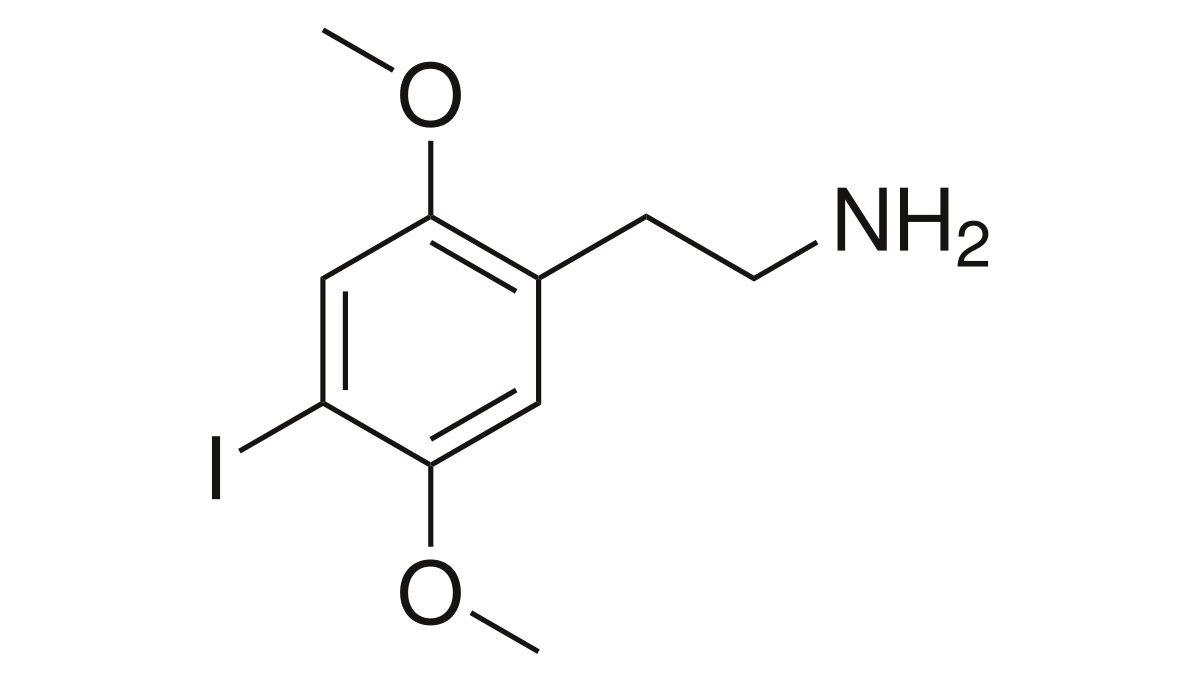 2C-I (2,5-Dimethoxy-4-iodophenethylamine) is a psychedelic phenethylamine from 2C family, synthesized in 1976 by Shulgin. This compound is not used in medicine or industry, only for recreational purposes. It’s distributed in the form of white or light brown powder, may be crystalline, or compressed into a tablet.

In terms of effects, 2C-I is similar to its analogue 2C-B, but is characterized by a longer activity. As an empathogen, it acts lighter than 2C-B, and may have a stimulating effect.

2C-B and 2C-I are usually taken orally, but intranasal and inhalation use is also possible.

When taken orally, the effects occur within a longer period, the first effects appear in 45-60 minutes after use, the plateau lasts 2-4 hours, the decline lasts 1-2 hours. The trip is quite long, up to 8 hours.

When taken intranasally, the effects are felt almost immediately, in 1-10 minutes. The effects in this case are much stronger, but they last less. The plateau begins in 20-40 minutes and lasts 2-3 hours. 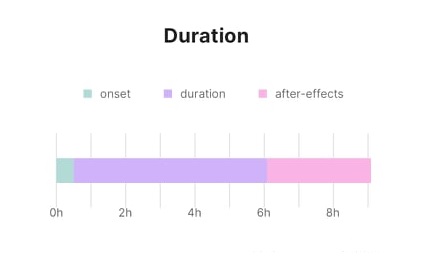 The substance can be detected in the urine within 3 days after use.

2C-B, 2C-I + alcohol: Alcohol may increase the euphoric effects of 2C. At light doses, it weakens the psychedelic effects. In common and strong doses, alcohol leads to severe dehydration, nausea and physical exhaustion, as a result to a bad trip. Drinking large amounts of alcohol is not recommended, as it can easily lead to loss of consciousness and unpredictable behavior.

2C-B, 2C-I + cannabis: Cannabis has an unexpectedly strong and somewhat unpredictable synergy with psychedelics (synergy is unidirectional action of several substances, which leads to enhancement or change of effects, including undesirable effects). The combination significantly increases the sensitivity and cognitive effects of psychedelic drugs. It requires special attention, as it can significantly increase the likelihood of negative psychological reactions such as anxiety, confusion and psychosis.

2C-B, 2C-I + benzodiazepines: Depending on the dosage, benzodiazepines can reduce the intensity of physical and visual effects. Memory problems may occur.

2C-B, 2C-I + LSD, magic mushrooms: In combination with other psychedelics, physical, cognitive and visual effects may intensify and form strong synergies. The synergy between these substances is unpredictable, so the combination is not recommended. If you decide to take this combination, you should take much lower doses of both substances than you usually take separately.

2C-B, 2C-I + ketamine, methoxetamine: In combination with dissociative substances, euphoria, dissociation and hallucinations may be greatly enhanced. This leads to greater confusion, delusions and psychosis.

2C-B, 2C-I + MDMA: In combination with MDMA, physical and cognitive effects (euphoria, visual hallucinations) are greatly enhanced. The synergy between these substances is unpredictable, so much lower doses should be taken than when these substances are used separately. The combination may strengthen the neurotoxic effects of MDMA.

1. Pay attention to the environment where you use psychedelics. It should be a pleasant place, and there should be people you know. Do not neglect the presence of the sitter, a person who will be with you during the trip. Do not use any psychoactive substances with strangers!

2. Be careful with dosing, especially if you are a beginner. If you are taking 2С-B, 2C-I with another substance, take lower doses than when taking them separately.

3. NEVER USE 2С-B, 2C-I WHILE DRIVING or in another situation requiring concentration and attention!

4. Before experimenting with 2С, eat only light food and no later than 2 hours before taking the substance.

5. After 2С experiments, you need a rest, so plan your trip when you don’t have important things to do the next day.

7. If you have the opportunity, check the substances before using it.

WHAT TO DO IN CASE OF BAD TRIP

1. As soon as unpleasant thoughts or fears begin to appear, try to block them immediately. Don’t panic. Calm down. Remember, it’s all just thoughts.

2. Try to determine what you do not like right now, what causes unpleasant feelings. If possible, eliminate the stimulus.

4. If you have friends who understand the mechanism of psychedelic effects and know what a bad trip is, ask for help.

5. Drink sweet tea (but not coffee) and eat sweets.

6. If your friend has a bad trip, do not let him or her plunge into bad thoughts and fears. Talk to him or her, distract, stay with him or her, hold their hand.

Symptoms of 2C-B and 2C-I intoxication, including acute, are psychostimulant and hallucinogenic.

Symptoms of 2C overdose (one or more of the following):