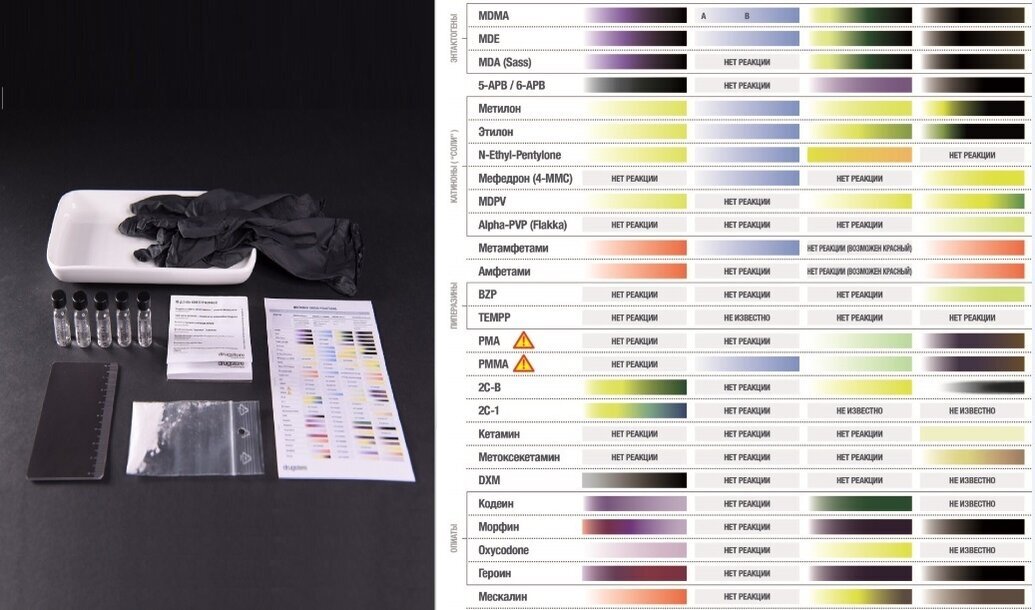 Instructions for testing psychoactive substances with the help of special reagents

Except testing the substance in the special laboratories with complicated and expensive equipment, there is a method available to an ordinary user, rapid tests. They do not give such detailed results as laboratory tests do, but they can help you understand what your sample of a psychoactive substance is. The action of these tests is based on the chemical reactions, for which special reagents are used.

Reagents are chemical compounds which change color on contact with certain substances detecting their presence in the sample you want to test. However, reagents cannot detect every substance and they do not answer how clean or potent the drug is. Even if you get the expected color reaction, this sample may still contain one or more side substances!

Despite these points, reagent testing allows you to detect the presence of specific substances and (most importantly) shows if your sample does not contain the drug you want.

HOW TO USE REAGENTS?

To test a drug you need:

Test in the following sequence:

✔1. Prepare everything you need and put on gloves.

✔2. Take a small amount of the substance and place it on a clean white ceramic or glass surface (a plate). We need a tiny piece or amount of substances, no more than 20 milligrams – the size of a match head. For compressed pills, scrape off the required amount of powder with a sharp knife. To check the mark, cut a tiny piece of the corner. For liquid one drop is enough.

✔3. Grind the sample for the consistency without lumps (for example, with a plastic card).

✔5. Put the bottle one or two centimeters above the substance and pour one or two drops of the reagent on the sample. Be careful not to touch the sample with a bottle, otherwise you may spoil the remaining reagent!

✔6. Close the bottle tightly with a cap and immediately observe the color change of the sample on the surface.

Compare what you see with the color scheme to determine the result. If the color of the sample has not changed within the first 30 seconds or the color change does not match any of the options in the scheme, it means that the sample either does not contain substances listed in the scheme for this reagent, or it’s very diluted with other substances.

You can prepare an additional sample of the substance and use other reagents to test the sample for other substances. We recommend using several reagents to learn about the sample as much information as possible!

✔7. Wash all surfaces with soap after each test.

INSTRUCTIONS FOR USING TWO-COMPONENT REAGENTS (SIMON’S A, B)

These reagents consist of two parts, each of which is in a separate bottle. The bottles are marked with the letters A and B.

Via this link you will find video instructions on how to test a psychoactive substances:

You need to compare your results with this scheme: 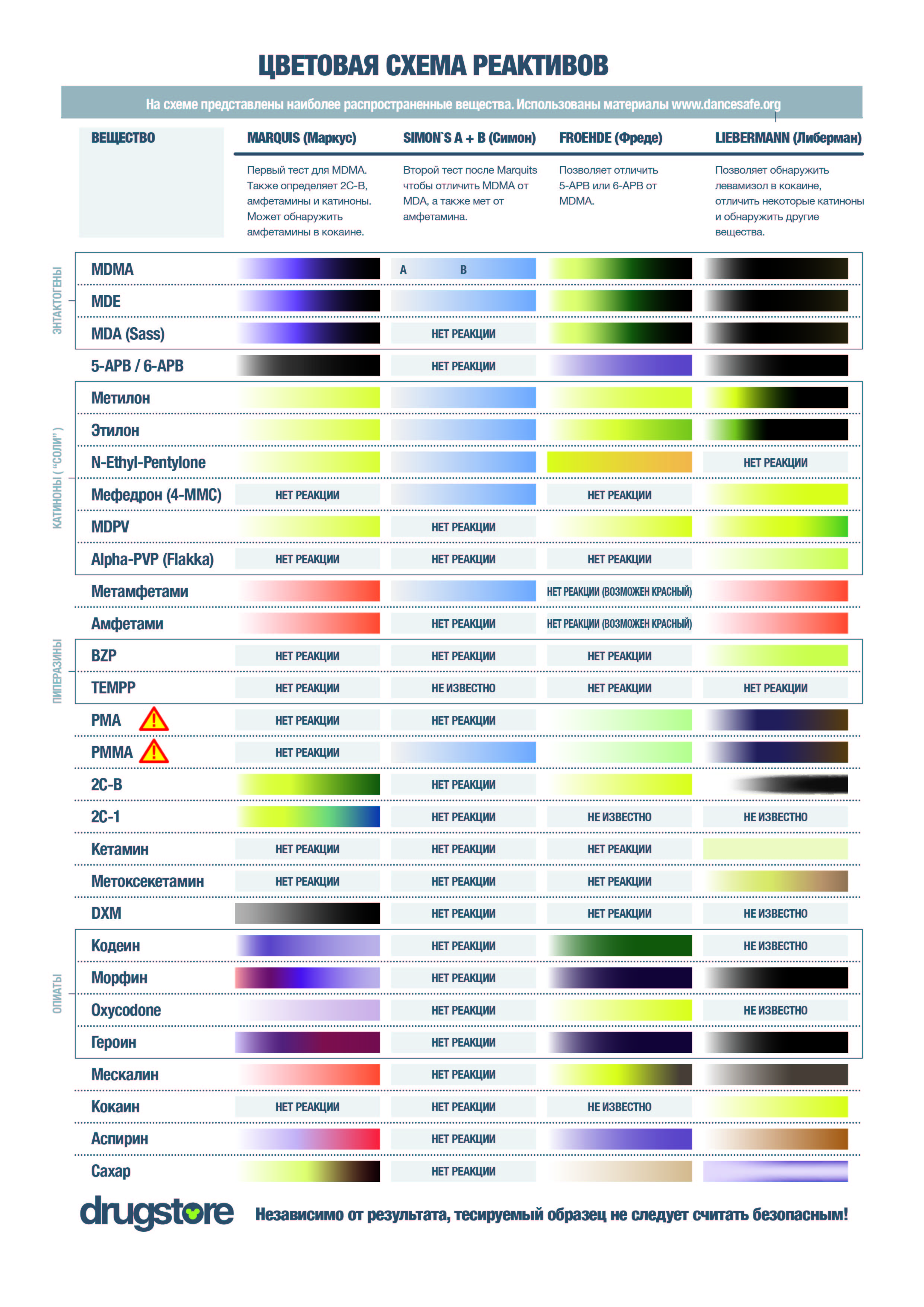 RECOMMENDATIONS FOR THE KEEPING AND HANDLING OF REAGENTS

Regardless of the results, the test sample cannot be considered safe!

By using banned or unknown substances, you are acting at your own risk.

Is it possible to test a sample that contains several substances? Will the result be the color of the substance which amount in the compositionis the largest?

It depends on how well the components are mixed. Two colors can be seen. The result also depends on the proportion of each substance in the sample. But in general, to get some more or less accurate results in this case is very difficult, and you can never be sure of them. Remember that many substances do not have a noticeable reaction at all.

The only way to know the exact composition in this case is to get a laboratory analysis.

Is it possible to distinguish between MDMA and MDE with these tests? When using Mandelin, the difference in color according to the color scheme is difficult to notice. Also, when using Mandelin, a very small puff of smoke sometimes appears. What does this indicate? During Simon’s testing, adding a second liquid turns the mixture into a dark blue liquid instead of the light one, as in the scheme.

Unfortunately, we do not yet know any reagent that could easily distinguish MDMA from MDE.

When tested with Simon’s, both substances turn blue. The reason why the color is sometimes lighter than in the scheme is that sometimes people take too little amount of substance, and in such cases we have not too dark blue.

Smoke is a common reaction of sulfuric acid (in Marquis, Mecke and Mandelin) with hydrochloride salts, which make up most psychoactive compounds. Sometimes it happens, sometimes it doesn’t. This is not crucial for identification, as smoke is characteristic of a large number of reactions. The same goes for bubbles.

❗ We do not promote psychoactive substance use, it is never completely safe. The safest choice is to never use drugs.